Lontong is a dish made of compressed rice cake in the form of a cylinder wrapped inside a banana leaf,commonly found in Indonesia; also in Malaysia and Singapore. The rice rolled inside banana leaf and boiled, then cut into small cakes as staple food replacement of steamed rice. The texture is similar to those of ketupat, with the difference that ketupat container was made from weaved janur (young coconut leaf) fronds, while lontong uses banana leaf instead.

It is commonly called nasi himpit (lit. “pressed rice”) in Malaysia, despite actually having different

method to create it.

Arem-arem is the smaller size of lontong filled with vegetables (carrot, common bean and potato) sometimes also filled with meat, are eaten as snack.

The dish is usually served cold or at room temperature with peanut sauce-based dishes such as gado-gado, karedok, ketoprak, other traditional salads, and satay. It can be eaten as an accompaniment to coconut milk-based soups, such as soto, gulai andcurries. It is also used as an alternative to vermicelli noodles.

e by boiling the rice until it is partially cooked and packing it tightly into a rolled-up banana leaf. The leaf is secured with lidi semat, wooden needle made from the central rib of coconut leaf, and cooked in boiling water for about 90 minutes. Once the compacted rice has cooled, it can be cut up into bite-sized pieces. Outer parts of lontong usually have greenish color because of the chlorophyll left by banana leaf.

Alternative ways of cooking lontong include placing uncooked rice into a muslin bag then letting the water seep in and cause the rice to form a solid mass. Another popular and easier method is by using commercially available plastic pouches; rice-filled and punctured with needle to create small holes to allow the water to seep into the package, which are then boiled until the rice becomes cooked and have fully filled up the pouch. This method was meant to imitate the banana leaf’s liquid permeability. Nevertheless, the use of organic banana leaf is highly recommended for better health and ecological reasons.

On the other hand, Malaysian nasi himpit (lit. “pressed rice”) is traditionally created differently. The method is more a mechanical pressure than applying permeable boiling technique; freshly cooked rice is compressed for a few hours between two heavy stone slabs or two trays with a heavy weight on top to produce nasi himpit. However, nasi himpit is now usually speedily produced in water permeable plastic sachets filled with rice and boiled in water.

Just like rice, the taste of lontong is bland and neutral, it depends on other ingredients to give taste through spices and sauces. Commonly, lontong serves as the compact alternative of steamed rice. It can be served with almost any traditional dish recipes as staple food, but mostly have peanut sauce or coconut milk-based soup. 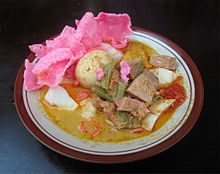 In Indonesia, especially among Betawi people, lontong usually served as lontong sayur, pieces of lontong served in coconut milk soup with shredded chayote, tempeh, tofu, hard-boiled egg, sambal and kerupuk. Lontong sayur is related and quite similar to Ketupat sayur and is a favourite breakfast menu next to bubur ayam and nasi uduk. 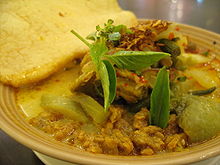 Lontong Cap Go Meh, a Chinese style (peranakan) of lontong can be found around Jakarta

Lontong dekem is originated from Pemalang Regency, Central Java. The process involves soaking the lontong in soup until it is submerged hence the name dekem meaning “immersion” in Pemalang Javanese dialect.

Another lontong recipes are lontong kupang and lotong balap from Surabaya and Sidoarjo area in East Java. Lontong kupang is made oflontong served with small white clams. 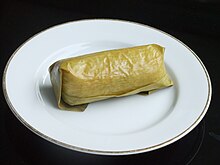 Arem-arem is the smaller size lontong filled with diced vegetables such as carrot, common bean and potato seasoned with salt and red chili, or tofu, oncom and tempeh. sometimes also filled with minced meat or abon (beef floss), are eaten as snack. The rice is flavored withcoconut milk. This kind of snack is called arem-arem in Javanese, but commonly called simply as lontong or lontong isi in other parts of Indonesia. It is a common snack in Java, and quite similar to lemper, but use common rice instead of sticky rice lemper. It is usually uses thin young banana leaf as wrapper, a thin light yellow-green colored banana leaf. Lontong on the other hand, usually uses thicker mature banana leaf. The texture of arem-arem snack is softer compared to those of common lontong, due to thinner banana leaf, addition of coconut milk and prolonged boiling and steaming period.

The lontong rice cake is cut into smaller pieces, these rice cakes pieces are known as nasi himpit (compressed rice). The term lontong in Malaysia and Singapore usually refers a dish which consists of rice cakes in a coconut based soup such as sayur lodeh containing shrimp and vegetables like chopped cabbage, turnip and carrots. Additional condiments are added either during cooking or in individual servings. These include things such as fried tempeh, fried tofu, boiled eggs, dried cuttlefish sambal, fried spicy shredded coconut (serunding kelapa), fried chicken etc.

8000 wedding invitation has been sent for Mr.President Jokowi’s daughter