Otak-otak is a grilled fish cake made of ground fish meat mixed with tapioca starch and spices. It is widely known acrossSoutheast Asia, especially in Indonesia, Malaysia and Singapore, where it is traditionally served fresh, wrapped inside a banana leaf, as well as in many Asian stores internationally — being sold as frozen food. It can be eaten solely as a snack or with steamed rice as part of a meal.

Otak means “brains” in Indonesian and Malay, and the name of the dish is derived from the idea that the dish somewhat resemblesbrains, being whitish grey, soft and almost squishy.Nevertheless, it was only otak-otak from Indonesia that has whitish color, while the otak-otak from Malaysia and Singapore has reddish-orange or brown coloring acquired from chili, turmeric and curry powder. 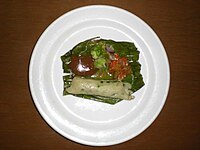 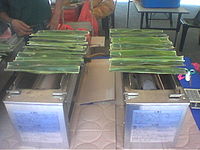 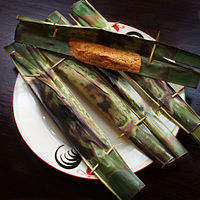 Otak-otak from Katong,Singapore. Otak-otaks in Malaysia and Singapore are brown

Otak-otak is found in certain parts of Indonesia, Malaysia and Singapore. In Indonesia, three cities are famous for their otak-otak;Palembang, Jakarta and Makassar,nevertheless most of coastal fishing towns in Indonesia are familiar with this dish. The southern Malaysian town of Muar in Johor is a popular destination for it — people from surrounding states and even Singaporeans often visit to buy the famous otak-otak in bulk. It is commonly known in Singapore as otah. Otak-otak is made by mixing fish paste with a mixture of spices. The type of fish used to make otak-otak might vary, mackerel is commonly used in Malaysia, while ikan tenggiri (wahoo) is popular ingredient in Indonesia. Other types of fish such as bandeng (milkfish) and the more expensive ikan belida (featherback fish) might be used. The ground fish and starch is seasoned with spices which usually includes garlic,shallot, coconut milk, pepper, salt and sugar.

In Indonesia, the mixture typically contains fish paste, shallots, garlic, scallions, egg, coconut milk, and sago starch or can be substituted fortapioca starch. In Malaysia, it is usually a mixture between fish paste, chili peppers, garlic, shallots, turmeric, lemon grass and coconut milk. The mixture is then wrapped in a banana leaf that has been softened by steaming, then grilled or steamed.

In Jakarta, Indonesia, one finds otak-otak being sold in small stalls near bus stops, especially during afternoon rush hour. Some of the best otak-otak can be found in Makassar; the main ingredient is fresh king mackerel fish, also called king fish or spanish mackerel.

In Malaysia, otak-otak is made from ground fish meat mixed with some spices such as chili, turmeric, and curry powder to add taste. The bones of fishes are first removed as only the fish meat is used, then blended using machine to make it softer. Chili, spices, salt, soy sauce and a little bit of flour are then added to the fish meat and are mixed well. Otak-otak is normally being wrapped inside the attap (Arenga pinnata) leaves and clipped using stapler or toothpick at both ends before being grilled or roasted on the stove.[citation needed]

The flavor combines the fragrance of burnt a

ttap leaves, the softness of fish meat and chili spices. The degree of spiciness corresponds to the amount of chilies being used. Since otak-otak is boneless fishcake, it is also suitable for children. While fish otak-otak is most common, otak-otak is also made with prawns, often resulting in a more textured variety. In Muar, there is also otak-otak made from cuttlefish, fish head and even chicken.

Other than grilling, some otak-otak might be steamed instead.[citation needed] Steamed otak-otak is in rectangular shape without any attap leaves wrapping. Otak-otak are served best freshly hot, as a side dish with rice or as snacks during tea time.

In Indonesia, otak-otak commonly associated with Palembang, South Sumatra. However, other regions in Indonesia also popular for their otak-otak recipes, such as Jakarta and Makassar. In Palembang, people eat otak-otak with cuko (Palembangese sweet and sour spicy vinegar sauce). While in Jakarta, they enjoy it with spicy peanut sauce.
In Malaysia otak-otak is commonly found in a small town called Muar, located south of West Peninsular Malaysia, Johor. The otak-otak from Muar is particularly renowned in Malaysia.[citation needed] Nyonya otak-otak (Malay: otak-otak Nyonya), with Peranakan origins, from the northern 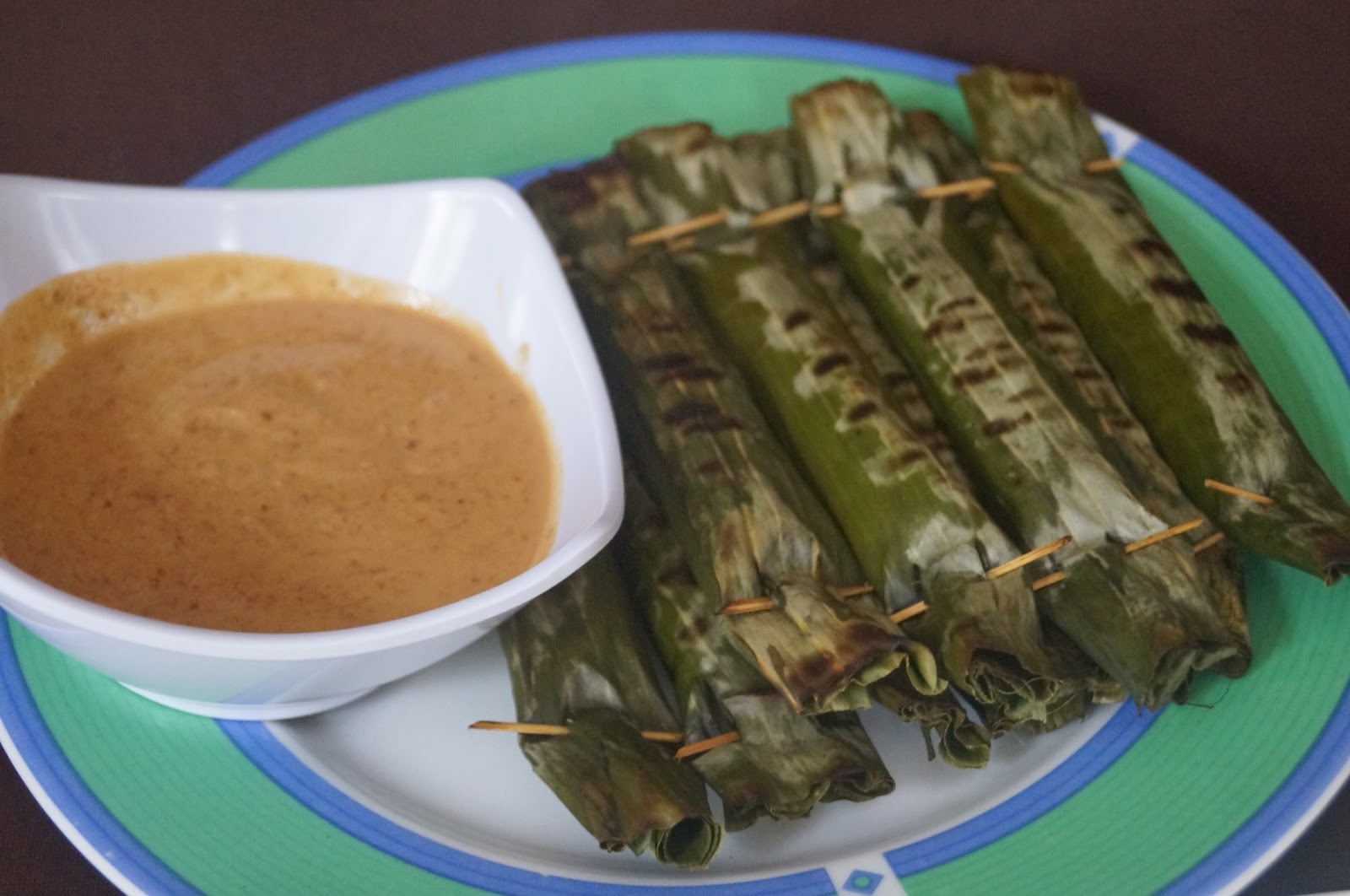 Malaysian state of Penang, is steamed as a cake in banana leaf. The otak-otak from Indonesia, the south of Malaysia, and Singapore is wrapped up as a thin slice using banana or coconut leaf and grilled over a charcoal fire. As a result, it ends up drier and with a more distinct smoky fish aroma. The color of otak-otak from Indonesia is whitish, while the otak-otak from Malaysia and Singapore is reddish-orange. Other varieties of otak-otak do exist. Although otak-otak is traditionally made with fish meat, modern versions of otak may utilize crabor prawn meat or even fish head. 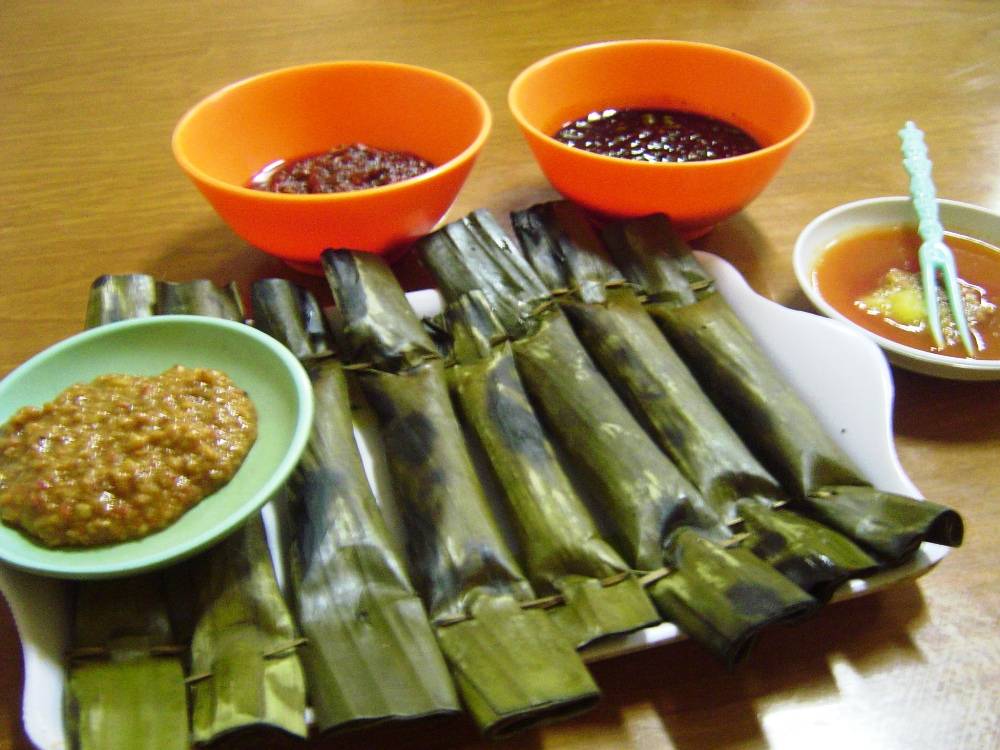 Singapore Sends back Indonesian maids under suspicion of being ISIS supporters