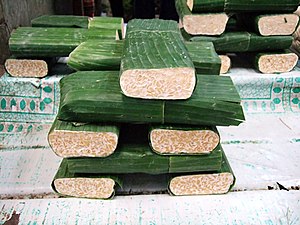 Tempeh (/ˈtɛmpeɪ/; Javanese: témpé, IPA: [tempe]) is a traditional soy product originating from Indonesia. It is made by a natural culturing and controlled fermentation process that binds soybeans into a cake form. Tempeh is unique among major traditional soy foods in that it is the only one that did not originate from the Sinosphere cuisine.

It originated in today’s Indonesia, and is especially popular on the island of Java, where it is a staple source of protein. Liketofu, tempeh is made from soybeans, but it is a whole soybean product with different nutritional characteristics and textural qualities. Tempeh’s fermentation process and its retention of the whole bean give it a higher content of protein, dietary fiber, and vitamins. It has a firm texture and an earthy flavor which becomes more pronounced as it ages. Because of its nutritional value, tempeh is used worldwide in vegetarian cuisine, where it is used as a meat analogue 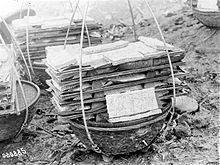 Tempeh originated in today’s Indonesia, probably on the island of Java. Soybean as the main tempeh ingredient has been recognized in Java and mentioned as kadêlê in an old Javanese manuscript Serat Sri Tanjung around the 12th to 13th century.The earliest known reference to tempeh appeared in 1815 in the Serat Centhini.

The discovery of tempeh is connected to tofu production in Java. The tofu-making industry was introduced to Java by Chinese immigrantscirca the 17th century. Chinese Indonesian historian Ong Hok Ham suggests that tempeh was accidentally discovered as the by-product of the tofu industry in Java; as discarded soybeans residue caught the spores and grew a certain whitish fungi that was found to be edible.The etymology of the term tempeh itself is suggested to be derived from old Javanese tumpi, a whitish food made from sagoo, while historian Denys Lombard suggests that it is linked to the local term tape or tapai which means “fermentation“. Three detailed, fully documented histories of tempeh, worldwide, have been written, all by Shurtleff and Aoyagi (1985, 1989, and 2001). 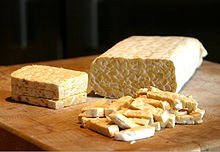 Tempeh begins with whole soybeans, which are softened by soaking, and dehulled, then partly cooked. Specialty tempehs may be made from other types of beans, wheat, or may include a mixture of beans and whole grains.

A mild acidulent, usually vinegar, may be added to lower the pH and create a selective environment that favors the growth of the tempeh mold over competitors. A fermentation starter containing the spores of fungusRhizopus oligosporus or Rhizopus oryzae is mixed in. The beans are spread into a thin layer and are allowed to ferment for 24 to 36 hours at a temperature around 30°C (86°F). In good tempeh, the beans are knitted together by a mat of white mycelium.

Traditional tempeh is often produced in Indonesia using Hibiscus tiliaceus leaves. The undersides of the leaves are covered in downy hairs known technically as trichomes to which the mold Rhizopus oligosporus can be found adhering in the wild. Soybeans are pressed into the leaf, and stored. Fermentation occurs resulting in tempeh.

Under conditions of lower temperature, or higher ventilation, gray or black patches of spores may form on the surface—this is not harmful, and should not affect the flavor or quality of the tempeh.This sporulation is normal on fully mature tempeh. A mild ammonia smell may accompany good tempeh as it ferments, but it should not be overpowering. In Indonesia, ripe tempeh (two or more days old) is considered a delicacy. This old tempeh is commonly called tempe bosok (rotten tempeh) in Java or tempe kemarin (yesterday tempeh), has slightly pungent aroma, and usually used to add taste in Javanese sayur lodeh dish.

The soy carbohydrates in tempeh become more digestible as a result of the fermentation process. In particular, the oligosaccharidesassociated with gas and indigestion are greatly reduced by the Rhizopus culture. In traditional tempeh-making shops, the starter culture often contains beneficial bacteria that produce vitamins such as B12 (though it is uncertain whether this B12 is always present and bioavailable). In western countries, it is more common to use a pure culture containing only Rhizopus oligosporus, which makes very little B12 and could be missing Citrobacter freundii and Klebsiella pneumoniae, which have been shown to produce significant levels of B12 analogs in tempeh when present. Whether these analogs are true, bioavailable B12, has not been thoroughly studied yet.[The fermentation process also reduces the phytic acid in soy, which in turn allows the body to absorb the minerals that soy provides.

In the kitchen, tempeh is often prepared by cutting it into pieces, soaking in brine or saltysauce, and then frying. Cooked tempeh can be eaten alone, or used in chili, stir frys, soups, salads, sandwiches, and stews. Tempeh’s complex flavor has been described as nutty, meaty, and mushroom-like. It freezes well, and is now commonly available in many western supermarkets, as well as in ethnic markets and health food stores. Tempeh performs well in a cheese grater, after which it may be used in the place of ground beef (as in tacos). When thin-sliced and deep-fried in oil, tempeh obtains a crisp golden crust while maintaining a soft interior—its sponge-like consistency makes it suitable for marinating. Dried tempeh (whether cooked or raw) is more portable and less perishable and may be used as a stew base. Sometimes when tempeh is diced and left, they will create white feathery fluff which bonds the cut, this is normal and still edible.

Will Indonesia’s first private airport to open in Bintan?